Like dandelions?  You may not have an answer to that.  But, like fried food?  Your answer is probably “yes, yes I do”, because fried food is frickin’ delicious.  So let’s use fried food as the gateway to trying dandelions.  Dandelions- those lawn weeds that large companies have made billions of dollars creating pesticides to kill – are incredibly good for you.  They’re readily available, and they’re nutrient dense.  And delicious!  Be careful where you gather them, though.  If they’ve been exposed to pesticides, roadside chemicals, or contaminated soil, just say no.  If they’ve been growing in your own back yard and you’ve lived there for years and know you keep that baby pristine and chem free, go ahead and gather!

Greens are best before the plant has flowered because they can get a rip roaring case of bitter later on in their life cycle, but the flowers are wonderful right at their peak of blooming.  Pick them during the day when they’re nice and open, and store in the fridge till you plan to use them.  They’re mighty perishable, though, so best to pick them the same day you plan to eat them.  I harvested the flowers around 1pm and fried them around 6pm with no problem.

Many thanks to Mountain Rose Herbs for the inspiration for this recipe!

1. Pick your dandelions and give them a good wash in cold water.  There may be dirt and a few tiny critters hanging on to them, so you may want to let them soak for 15 minutes to give everything a chance to clear out.  Rinse them off and put them flower top down on either a kitchen towel or paper towel.  Let them dry while making the batter. 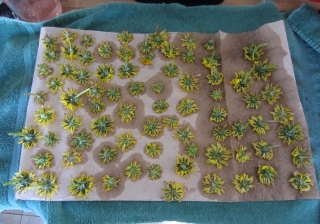 2. Whisk together egg, soy  milk, flour, vanilla extract, maple syrup, cinnamon, nutmeg, and salt till it thoroughly combined and smooth.  The batter should be a little thinner than pancake batter, so feel free to add more milk if it looks too thick, or a smidge more flour if it’s too thin.  You want it to be able to coat the flowers, but not completely overwhelm them.

3. Add the oil to a large skillet and let it heat till a few drops of the batter start frying immediately when added.  You don’t want the pan so hot that the batter burns, but you also don’t want it cool enough that the batter droplets just sit there without cooking.  Too hot burns, too cold gives you oily fritters.  Fiddling with the heat till it’s the right temperature is 100% worth the effort.

4. It’s battering time!  Hold the flower by the stem, dip it into the batter, swirl it a few times, shake the excess batter off, and immediately place it, stem up, into the oil.  Work in batches of 10 flowers so you can keep an eye on them while they fry up.  It happens quicker than you think! 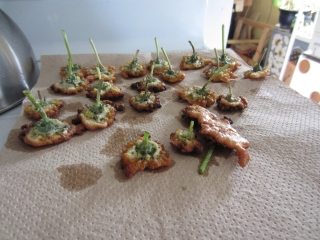 These are best eaten immediately.  They can be kept in a warm oven before serving, but after an hour they get a little soggy.  Honestly, though, they’re too tasty to last more than an hour…

I highly recommend giving these a try.  And, as I found out, left over batter is a very handy thing to keep around, especially if you slice bananas, dip them in the batter, and pan fry them for breakfast!